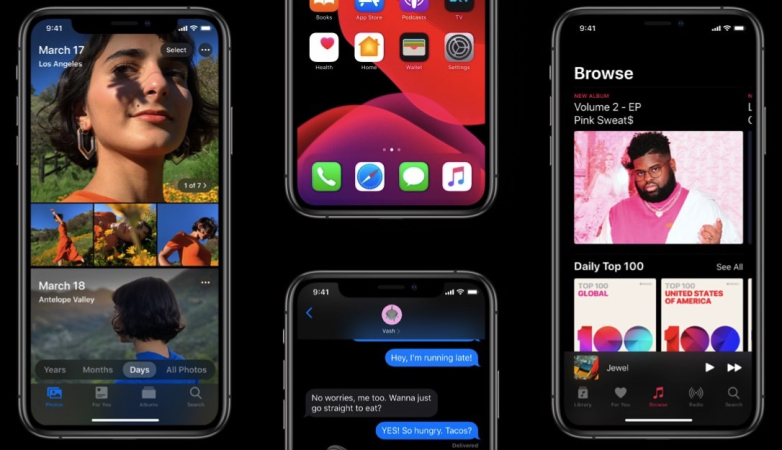 iOS 13 is the thirteenth major release of the iOS mobile operating system developed by Apple Inc. for their iPhone and iPod Touchlines. iOS 13 is compatible with 6s and all the later versions that come after. This means both iPhone 5S and iPhone 6 don’t make the list and are forever stuck with iOS 12.4.1. Therefore, it’s time for you to upgrade your Apple handset.

Dark Mode is the most visual change in iOS 13. It inverts white and light grey colours for less eye-straining black and dark greys – at least in major apps. It enables you to see the phone screen on a sunny day without a struggle and also in a dark room without feeling like the light from your phone is too much.

One of the interesting new features on iOS is in phone settings. If you never, ever want to take a call from anyone who isn’t in your contacts list Apple now has you covered. Go to Settings > Phone and turn on Silence Unknown Callers. You’ll see the warning below it that “Calls from unknown numbers will be silenced, sent to voicemail, and displayed on the Recents list.” This is in addition to the blocking of specific contacts from calling you which is still available.

Initially, on Safari, you changed features like font size and it applied to every site you visited in that browser. Now, settings are per- website, so you can have a large font on one site, and smaller font on another.

Another new awesome feature on the iOS 13 is the improved Face ID function. Now, the field of view for unlocking your phone with your face is wider which means, for example, looking at your iPhone placed on the desk will unlock it without needing to lift the handset.

In this new iOS, there are improvements in battery life in terms of  ‘lifetime of the battery’ not ‘time between charges’. The new iOS 13 platform is smarter at charging and will curtail the power input at the right times. The dark mode should help too on iPhone OLED displays, though we’re testing that.

The camera is also getting a big upgrade i.e.  Portrait mode (if your phone supports it) will offer more customizable lighting and a new ‘High Key Mono’ mode. It also comes with more sophisticated video and photo editing tools that give you the power to effect whatever changes you want to your photos and videos.

FaceTime in the new iOS also got an upgrade. There’s now an option for FaceTime Attention Correction, and it’s as wild as it sounds. What does it do exactly? It makes it so that it appears as if you’re looking straight into the front-facing camera during a FaceTime video call, when you’re actually looking at the adjacent screen. That distracted look could be a thing of the past soon.

Siri is also another beneficiary of the iOS 13 update. The Siri function has been awarded more power in terms of how it interacts with other apps Apple device. This has been done through the built-in Shortcuts app which allows you to create shortcuts for Siri to use in other apps. For those who have the HomePod, the Siri function of the Pod now has the capability to recognize the voices of family members and this lets everyone have a personal experience.

The release notes for iOS 13.1 reflects how buggy the initial release of iOS 13 actually was, with the new update bringing fixes for issues with Mail, Siri not working with CarPlay, faulty app icons and sign-in failures.

Another major issue with iOS 13 was with location permissions – a lot of Companies recently reported that if a user had selected to never share location details for an app, a privacy flaw changed that selection to “Ask next time”.

Previous Post
Apple Watch Series 5 in Nairobi, Kenya
Next Post
iPad Pro and iPadOS
Menu
Open
1
Hello there 👋
How can we help you today?