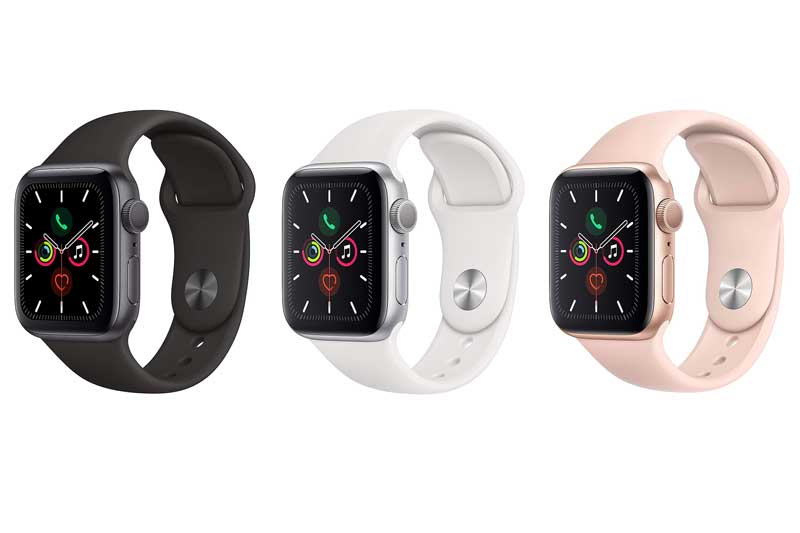 The Apple Watch Series 5 was announced during Apple’s fall event on September 10, 2019. Customers were able to purchase the device later that day, and it was released on September 20.

The Series 5 replaces the Series 4, which is no longer available through Apple but can be found for a steal from third-party retailers. Apple is still selling the 2-year-old Series 3.

The Series 5 supports Electronic SIM card (e-SIM), which unfortunately is not supported here in Kenya. Only 10 countries are currently supporting the e-SIM

The Apple Watch Series 5 is available in both the 40mm and 44mm displays which come with the new always-on feature. The materials used to make the watch cases are ceramic, aluminium and for the first time, there will also be cases made of titanium. As for the watch bands, one is free to purchase interchangeable bands of various materials from high-performance rubber, flexible nylon weaves, leather bands and even metallic bands.

The new Series 5 runs on a new Apple S5 chip inside: 64-bit dual-core S5 processor, up to 2x faster than S3 processor (includes W3 wireless chip). The Series 5 includes 32GB internal storage, up from 16 GB from previous models. It also runs the watchOS 6 which was released on the same day. Currently, the Apple Watch Series 5 is upgradable to watch OS6.0.1 same as its predecessor the series 4.

Apple announced that one of the headlining features in Series 5 is a built-in compass. Compass isn’t the only app that takes advantage of the watch’s built-in magnetometer. Apple is opening the Compass API to third-party apps and is also using it in its own Maps app to enable a feature that shows you which direction you’re facing.

Apart from it being a state of the art smart watch, the Apple Watch Series 5 is also a world-class fitness watch with a workout app that includes most workout routines from outdoor exercises to indoor ones. This is especially for but not limited to running, cycling, swimming, high-intensity training etc. The watch also works well with other third-party workout apps by sharing data from the native app. Like its predecessor, the series 5 is also fitted with a 50mm water-resistant capacity.

The favourite new features include the new Cycle Tracking app for logging period flow and symptoms (more on that in a minute), the Calculator app, which will save relationships with a built-in tip calculator, the Noise app for monitoring decibel levels and the new independent Watch App Store.

The Series 5 is the smartwatch to beat for iPhone owners buying their first watch (or upgrading from a Series 2 or older). For Series 4 owners, installing watchOS 6 will deliver many of the best new features. Series 3 owners should consider upgrading for heart health features and the always-on display

Previous Post
iPhone 11 Pro and iPhone 11 in Nairobi, Kenya
Next Post
iOS 13 Features
Menu
Open
1
Hello there 👋
How can we help you today?